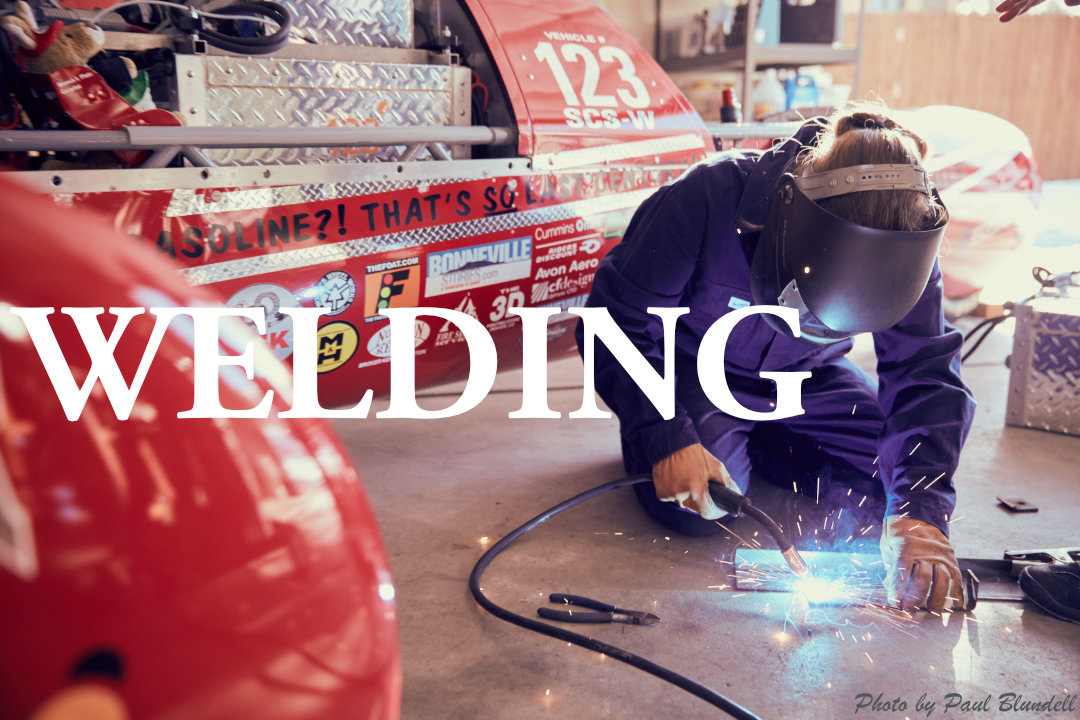 If there is a human superhero power, it is welding! Fusing metal with your hands – can it get any more amazing than that?

There are several different types of welding, but they are all based on the same principle. Welding is used to join materials that can be melted. The most common material to weld is steel and other metals, but certain types of plastics as well as glass can also be welded. In welding, the base material is melted using an electrical current or a flame to connect the two (or more) pieces together. A filler material is also often added, which melts together with the base material and helps fill in gaps. When the molten material has solidified again, the connection is often as strong as the base material.

In the cover photo the filler material is added as a steel wire that is feed through the handle (the handle is also called “gun”). Inside the welding machine is a large spool of metal wire. This kind of welding is called  MIG (Metal Inert Gas) welding.

In the photo below, I am adding the filler material myself in the form of a steel rod that I am holding in my left hand. This kind of welding is called TIG (Tungsten Inert Gas) welding. Read more about MIG and TIG welding and how it is used in the KillaJoule and Green Envy below, and read more about welding in general on Wikipedia. 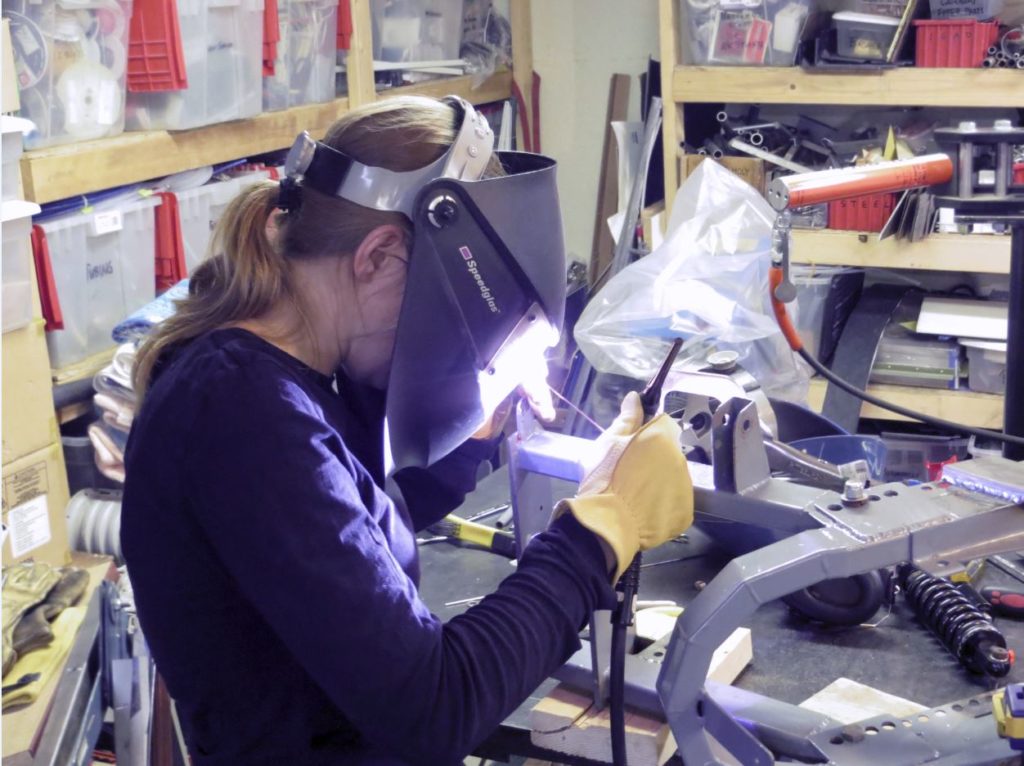 TIG welding on the front fork for the KillaJoule.

Welding in the KillaJoule and Green Envy

It would be essentially impossible to build a vehicle like KillaJoule and Green Envy without welding. It could theoretically be done, but it would be incredible complicated to join all the tubes with screws and nuts, and it would not be nearly as good. The main use of welding in the KillaJoule is the steel frame, sometimes also called the chassis. The frame holds all the internal components, and also connects to the wheels. The frame also contains a roll cage, which keeps the driver same in the event of a crash.

The tubes are made from a high strength steel called “chromium-molybdenum steel”. The name is often shortened to “chromoly”. It is a so called alloy, which means it contains a mixture of different metals or other elements. The specific kind of steel used in the KillaJoule and Green Envy is called 4130. 4130 contains 97-98 % iron, around 1 % of chromium and 0.2 % of molybdenum. There are also small amounts of carbon, manganese, phosphorous, sulphur, and silicon.  It is considerably stronger than normal steel, but also quite a bit more expensive. The KillaJoule contains steel tubes to a value of approximately US$ 3000.

MIG is probably the most common type of welding, and melts the metal with electrical current. MIG is the easiest easiest welding technique to learn. It is easy because all the stuff you need to weld is contained in the welding gun or torch. The filler material is fed out through the gun as thin steel wire, which also works as the electrode to conduct the current into the material. The shielding gas (typically a mix of Argon and CO2) is also fed through the same gun. In addition to this, the only thing you need to do is to connect the ground clamp to your material (the current cannot flow if the circuit isn’t complete).

When you pull the trigger, the welding machine turns on the current, turns on the gas flow, and starts feeding the welding wire at the same time. All of these can be changed with knobs on the machine, but you typically don’t change them while you are welding. You use the distance to the material, the angle, and the speed you move the gun at to control the weld. Because the machine continuously feeds out welding wire, the weld will look like a bead or seam.

MIG welding is fast and the machine is fairly inexpensive. However, MIG welding may not be as strong or controllable as TIG welding, which is covered below. MIG welding tends to create a lot of sparks and spatter. This can be scary for a novice welder, but is not a problem if you wear appropriate safety gear. It may look like my hands are bare in the cover photo, but I just happen to have beige leather gloves. A welding mask is absolutely necessary when you weld. The auto-darkening such as SpeedGlas are my personal preference. You can see a slow-mo video of me MIG welding below. If you want to know how a MIG welder works on the inside, or want to learn more about MIG welding in general, check out Instructables. 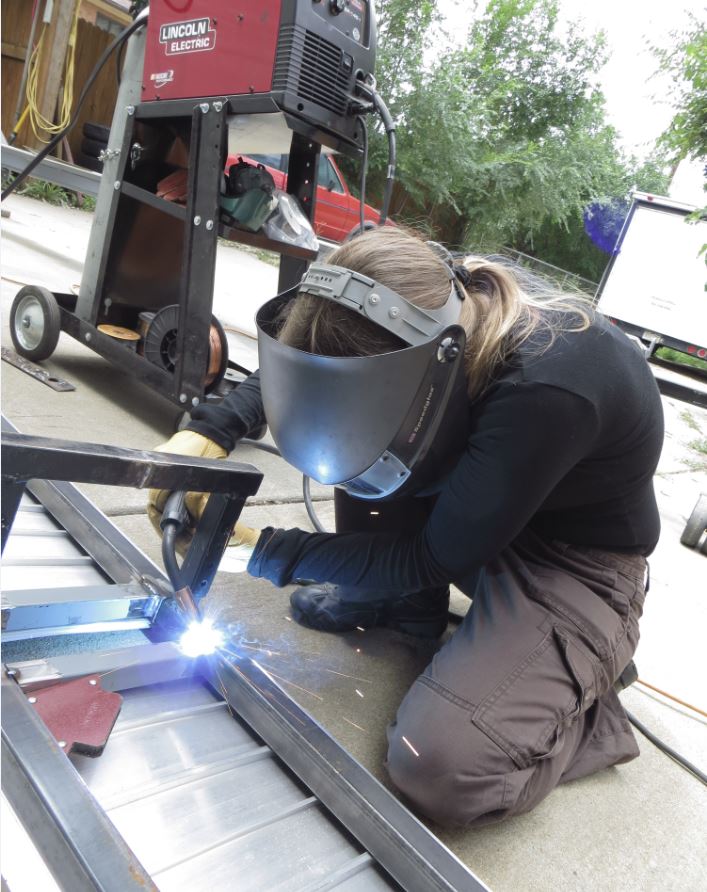 TIG welding is based on a similar principle as MIG. An electric current is run through the material that heats up and melts. The difference is that the TIG gun (handle) doesn’t contain a steel wire that is continuously fed out. Instead, the TIG gun contains an electrode made from tungsten, which is a metal with a very high melting temperature. The electrical current flows through the tungsten electrode into the material that you want weld (and then through the ground clamp into the welding machine, just like with MIG). The tungsten electrode doesn’t melt, it just conducts the electricity. The shielding gas, typically argon, also comes out through the gun.

If a filler material is needed, it is added with a rod that is inserted into the melt pool directly. You hold the welding gun in one hand, and the filler rod in the other hand. But it doesn’t stop there. Unlike with MIG, you can control the flow of current in TIG welding. This is done with either a foot pedal or a hand grip added to the gun. You can see that there are many more things to coordinate in TIG welding than in MIG welding.

Despite TIG is more difficult, much slower, and the machine itself can be several times more expensive than a MIG machine, TIG welding has many benefits. Because there are more things you can control, you can also get a higher quality of the weld. TIG welding generally results in stronger and nicer looking welds, and is the method commonly used for race car roll cages and frames such in the KillaJoule and Green Envy. Correctly done TIG welding can look very nice.

There are lots of tutorials about TIG welding on the Instructables website.

A couple of years ago, I felt that I needed to improve my TIG skills, so I decided to build myself a welding table. The normal choice for such a job would have been MIG because it is fast, but I wanted to practice TIG so I used that method despite it is much slower. The timelapse below shows the entire build, from cutting the tubes to posing on the finished table. Bill came by lent me a hand as well. The table was designed in Inventor, and you can see the original drawing below. 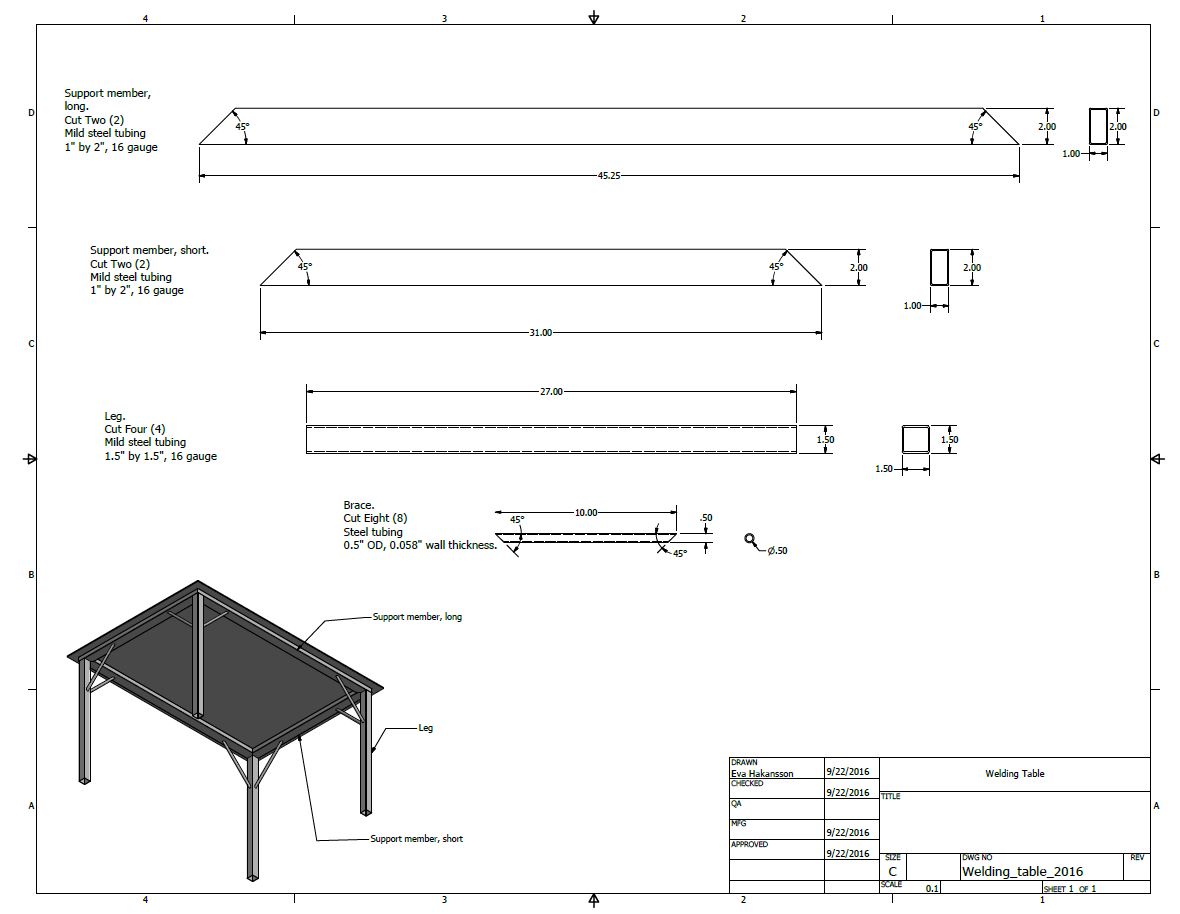 Another type of welding is spot welding. It also uses electrical current, but instead of using a welding gun and a ground clamp to complete the circuit, the spot welder uses two electrodes. Bill and I have built multiple battery packs for our racing vehicles by spot welding small battery cells together. The timelapse video shows me welding one layer in an earlier version of the KillaJoule battery pack. These days, the KillaJoule uses a different kind of cells, so called pouch cells (they look like a vacuum packed space meal) and those are laser welded together.